Exactly a month ago yesterday I buttoned down my white lab coat, rolled up its sleeves, put on my knitted brain cap, grabbed my carefully saran-wrapped poster and caught a Lyft to the State Capital of Tennessee to participate in the Nashville March for Science. There was a downpour of rain the night before, severe lighting and thunder which had many of the organizers and volunteers, including myself, concerned about a possible cancellation.  According to The Tennessean, despite the forecaster’s predictive promise and fulfillment of rain, about 4,000 people gathered on Earth Day and marched in raincoats and sweaters, with hats and umbrellas.

As a volunteer on the Singing and Chants team, I handed out chant-sheets to those gathered, yet never having marched before myself, I had only participated in a rally for Sanctuary Campus status,  I wondered how exactly the marching and chanting would unfold. I remember attending one of the first meetings for organizing the local march for Science, and before the weather presented its own set of challenges, it was difficult to foresee whether an actual march would materialize. An Earth Day March celebration had already been scheduled for the same day, albeit later in the afternoon. 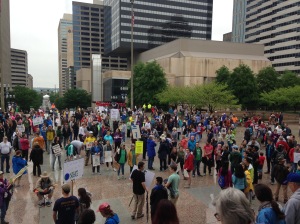 I also learned that financially, a rally would be more cost effective than an actual March – which would require more money to blockade streets, in addition to hiring security and accommodating large crowds with important resources like portable restrooms, drinking water and medical care. Despite these challenges, I saw the march materialize from an idea on paper to a reality through the dedication and hard work of volunteer science teachers, graduate students, university faculty, health care professionals and community members on the leadership team.

This entry marks the first of a special series featuring March for Science signs that promote harmony between faith and science. Each featured participant will share the story behind their sign and their reason for and hopes in marching.

Why did you march?

I marched to show in a visible and tangible way that I support science. Yes, I’m a scientist, and I’ve studied science in the classroom and in the lab, but this march was outside of the classroom – outside of the lab – outside of a university campus where I’ve spent most of my life (a friend of mine has called me a professional student!), outside of my academic comfort zones and into the community.

Also, as a religious person with my own journey of reconciling faith with science, I wanted to be a presence and voice of the harmony I’ve found. Yet, I still found myself wondering what religious voices would be present at the march and what would their signs say? Would I find myself agreeing or disagreeing with their signs? Would I find anti-religious sentiments on signs and would it be a safe space for a sign like mine? Thankfully, I found a safe space.

There were more signs than not with positive vibes – one from a fellow Divinity student simply and sweetly proclaiming, “Christians for Science!” in large bold letters, which he raised proudly with a welcoming smile. Even a sign which said that the Bible is not a science book, which I have no problem agreeing with because it is not a science curriculum – although I do admit to having a preference for language that reaffirms to the general public what science is, rather than what it is not, just for the sake of not further alienating a population that already has their own set of barriers to engaging with aspects of science.

What was the message on your sign, and why did you choose it?

The message on my sign was, “Science OR Religion you don’t have to make a decision. Sincerely, A Scientist.” I chose these words because I wanted to be a voice of positive religious representation at the march, and I wanted to make a simple statement that one doesn’t have to pick and choose. I wanted the statement to be open ended, not offering answers or solutions to how one can arrive at harmony but encouraging others to discover for themselves. These words are also the lyrics to an original science and religion reggae rap song that I am currently working.

Did anyone respond to the message on your sign?

Actually, I didn’t get to hold my sign as prominently as I would’ve liked since I was, at various points, also holding a cup of coffee or a bull-horn to help with chants – sometimes all at once! I was approached by someone who briefly shared her faith background with me, and that she too had found harmony.

I am currently collaborating with a talented theologian and rapper, on an original science and religion reggae rap song that encourages dialogue between science and faith communities. It explores the idea that science and religion don’t have to be mutually exclusive. This is a post-March for Science effort to start conversations in religious communities. I am also hoping to help start an NCSE Science Booster Club effort and reach out to churches to engage and teach the congregation about science.